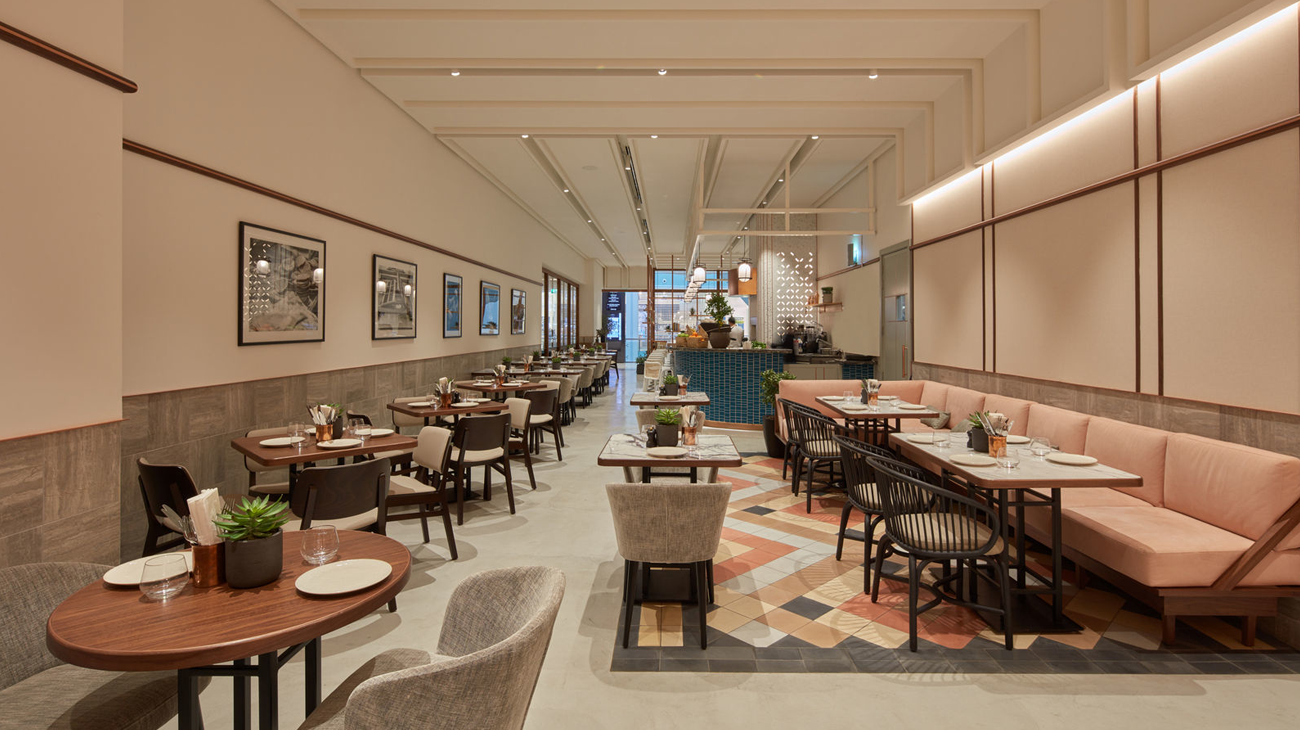 Commissioned by three Emirati siblings, the restaurant is an homage to their mother, Asma, and her home. H2R responded to the brief by creating an interior that is nostalgic and homely, while keeping to the firm’s contemporary design approach, describing it as a “modern heritage site”.

The restaurant space was previously occupied by a retail space due to its location being in a shopping mall, therefore, it required a full refit and redesign. Some of the major changes included raising the floor in order to fit in the piping for the bar and kitchen area as well as in other areas to ensure the space functioned structurally.

The designers also took into consideration diners with special needs, creating a sectioned-off floor level area for more comfortable access.
The long and slim shape of the unit posed a challenge to the designers in terms of accommodating a full-service kitchen which is the central feature of the restaurant. The aim was to make the kitchen a focal point with strategic access for operational tasks, as access to the back of the house was not readily available.

Given that the underlying concept was to depict a traditional home, with the kitchen at the heart of the project, H2R Design chose to use a bold colour in the visible front of the house section and the bar reinforcing the prominence of the area. Blue tiles cover the bar’s exterior layer and stand out to bring a strong pop of colour into the overall space.

Copper detailing is another important element throughout the design, with sections of it detectable either at the bottom of the bar, the pizza oven, the shelving or across the table centrepieces. Copper plays a subtle role, reminiscent of old-style kitchen utensils and is used as a recurring motif throughout the design concept.

H2R Design also took into consideration seating and ways of maximizing the capacity of the space. A seamless flow of seating needed to be designed surrounding the kitchen positioned in the centre without segregating the various areas between the bar, banquette dining area and the movable tables and chairs. This was achieved by moving the entrance foyer and by adding middle and back seating.

At the far-end of the restaurant, H2R Design added terracotta backlit panels highlighting a semi-private seating area. With the use of the warm light, shadows and curves, this seating area softens the long dimensions of the overall space.
Bespoke banquette seating with salmon pink, muted yellows and oranges also bring warmth adding to the relaxed dining experience.