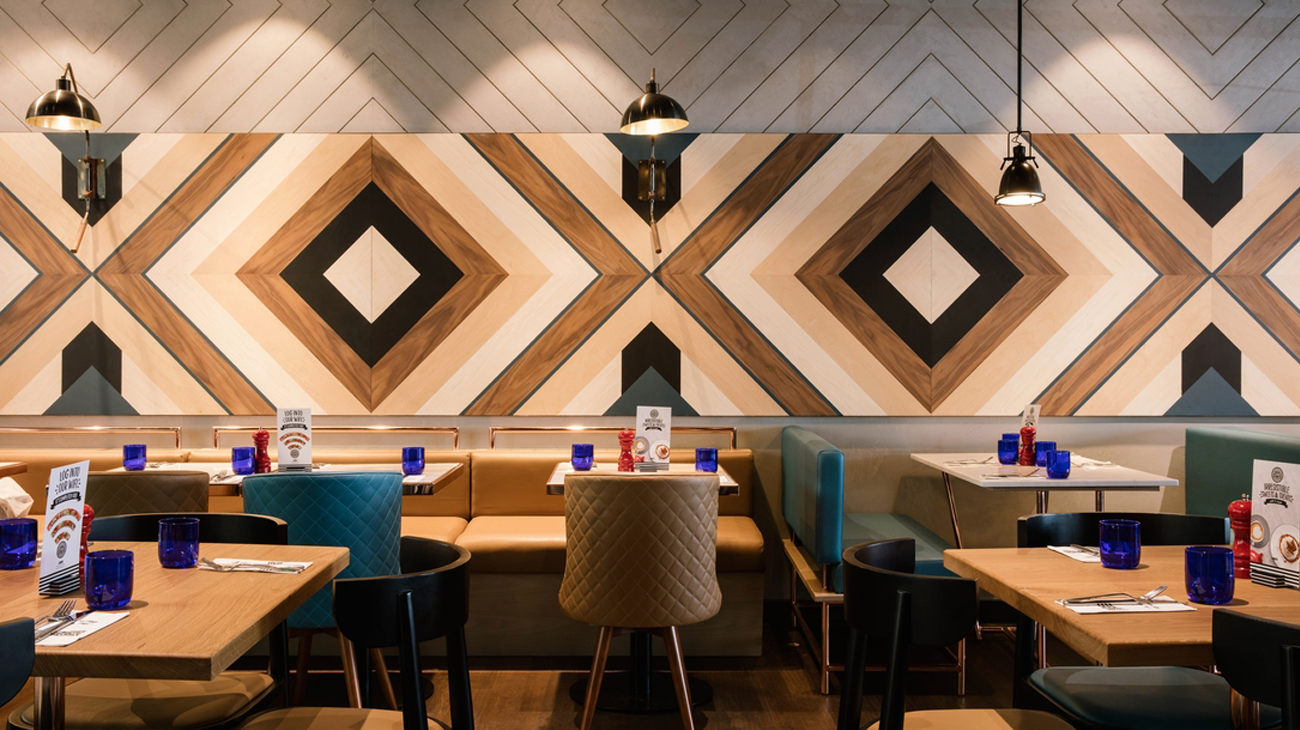 Dubai and London-based H2R Design has been commissioned by Pizza Express to design its newest chain located in Matajer Shopping Mall in Sharjah’s University City.

While aiming to remain true to the brand’s tag line of ‘stylish, creative, and relevant’, H2R took inspiration from the eatery’s academic location, with every corner designed to “trigger interest”. One such inspiration is a feature wall using the mathematical figure of Pi which integrates the eatery’s branding.

“We wanted to design a space that relates to the constant and chaotic life of students,” the design team explained. “In aiming to evoke a feeling of intrigue, discovery, and experimentation, the design sparks curiosity of students through the use of a show kitchen, as most Pizza Express restaurants do.”

The show kitchen was designed to adhere to the strict mall restrictions – which minimised the visibility of cooking equipment – however this created an opportunity to skew and rotate the kitchen and angle it within the space, allowing the team to configure the restaurant into zones.

The interiors showcases a range of natural materials, with the majority of the seating space completed using coloured patterned timber wall strips which was intended to add a sense of movement to the space. Geometric wall patterns and diagonally-striped floor tiles also make up the space.

To cater to a students, the designers used artworks and neon signage, including wall lighting in the shape of test tubes; while convex mirrors represent the principles of reflection and refraction.

“The concept behind the interior aims to channel the culture and attitude of university life,” H2R explained. “We wanted to create a space that fills their souls not only with the wonderful Pizza Express menu, but also through the strategic use of design elements to capture their curiosity.”

H2R Design’s Two at Symphony restaurant has been shortlisted for the CID Awards under the Food and Beverage category. You can view the full CID Awards 2018 shortlist here.