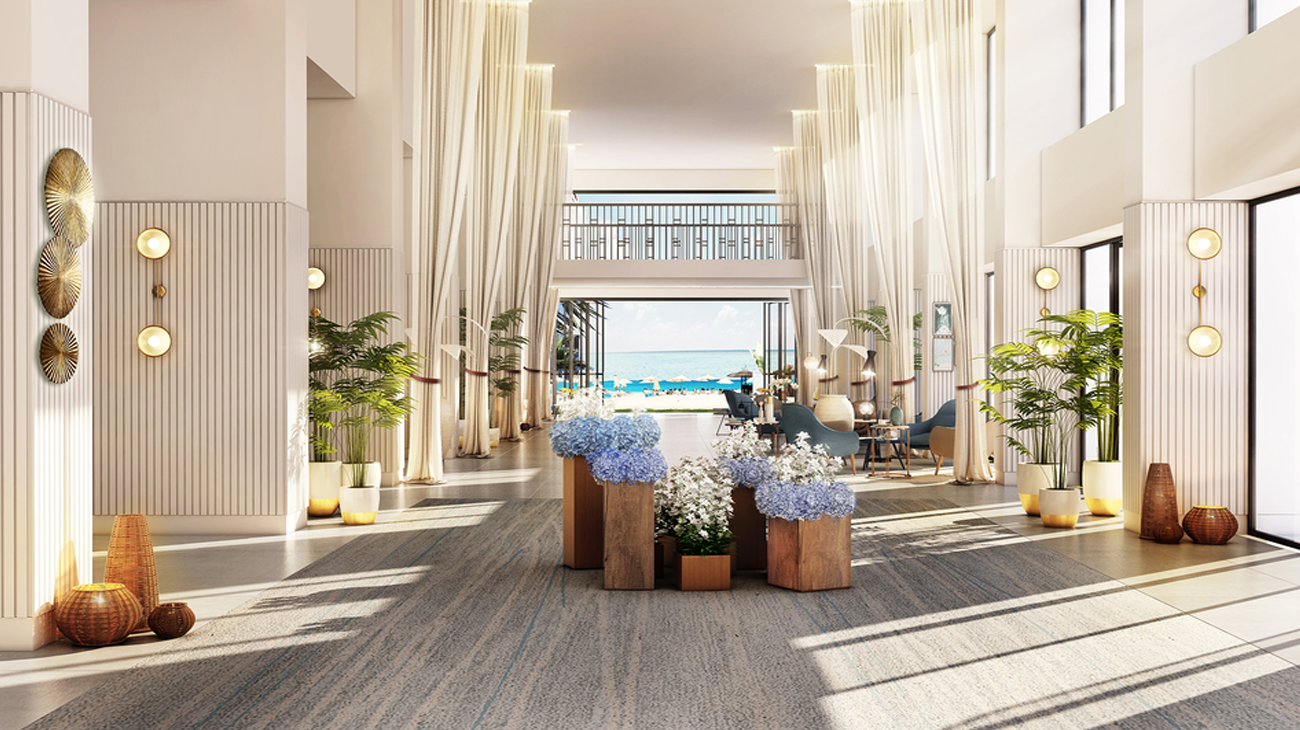 Taking cues from the 1960’s nostalgia and charm of the historic Alamein Hotel,  H2R Design has recently completed the larg scale renovation of the property. The up and coming design studio, which has recently created successful commercial and hospitality spaces in the region, collaborated with Emaar Hospitality, who spearheaded the restoration project.

Located in Egypt’s northern coast, it houses 190 rooms including luxury chalets, seven suites and two presidential villas. Throughout its 50-year history, has been frequented by celebrities, artists and bohemians.

While keeping the cultural context and heritage intact in their design strategy, the design firm has rejuvenated and created a modern boho-chic style. One of the main design schemes in the project was to integrate the surrounding seaside environment into the nature of the property.

The design theme for the project was a retro refurbishment including contemporary interiors, which paid subtle tribute to the glory days of when the resort first opened. Referencing vintage influences such as yesteryear Egyptian music and cinema, the design team created a link back to the hotel’s former celebrated guests.

“Throughout the property, we wanted to create a sense of refined classics and translate that through materiality, the furniture pieces, fixtures and equipment,” explain Hasan and Husain Roomi, the founders of H2R Design. “We used clean lines layered with textures to bring a modern mid-century experience and comfort twist to the mesmerising vistas.”

In order to successfully achieve a blend of vintage charm and contemporary elegance, H2R Design used a lot of natural white washed timber, light and breezy elements reflecting the coastal region, fabrics and upholstery suitable for the beach environment. The colours were meticulously selected to compliment the natural landscape (muted blues, light greys, off whites and accents of deep blue to reflect the everchanging colour of the sea. Metal was also used as an accent, adding elegance to the joinery, furniture elements and lighting, which played an integral role in illuminating the spaces.

As the most prominent space in the hotel, H2R Design instilled strong elements for returning guests to not only see the renovation, but to experience within the first impression. The prominent architectural features of the lobby include the welcoming central double volume lobby colonnade and atrium, which help open up the surrounding vistas.

“Alamein Hotels has been open since the 1960’s and throughout its existence, has had a prestigious and loyal guest following,” says Jacqui Shaddock, partner at H2R Design. “We intended to retain these guests and also revive their experience while encouraging a new generation of visitors. When transforming the hotel from the day to night scenarios, we focused on maintaining a welcoming and intimate ambiance, that would instantly make guests feel at ease.”

Each guest suite has been designed to capture the outside and seamlessly balance it with the interiors. The renovation was also met with some challenges for the team, such as the resort being fully occupied when the work began.

Given the antiquity of the building, accurate drawings of the site were not available and records of the many ad-hoc architectural changes were no longer available. The structure was unclear until a demolition commenced, and the H2R Design team had to continually adapt the design to suit new the discoveries on the site.

Inside a seaside cafe in Dubai created by H2R Design